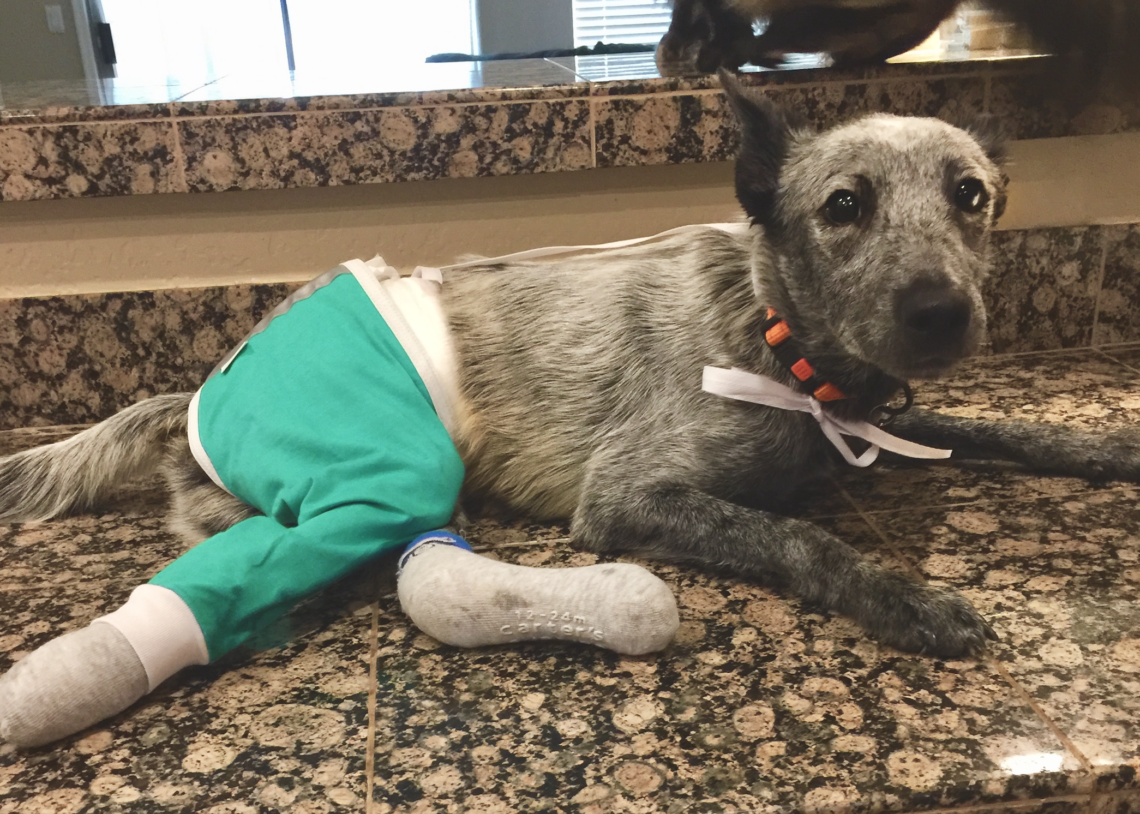 Left for dead Waylon was found in the gutter on the side of a busy road.

He was alive but in very bad condition. He looked awful. She told us he weighed only 15 lbs… 15 lbs!!! All I could think about was that he weighed 7lbs LESS than Georgia and she was by far the worst shape of a living creature that I had ever seen. I headed down to the clinic to be with him.

Upon arrival, I prepared myself for what I was about to see. I approached the towel he laid on in the back. He looked horrible. He could not stand. He had open sores and lacerations across his body. He was infested with thousands of ticks. They were covering every inch of him. You could feel every bone in his body. I sat down next to him. I approached very slow as I was sure he was in a significant amount of pain. As a slowly put my hand in front of his nose, he sniffed for a moment and then began to lick my hand. I completely melted. This dog has been through hell and his spirit still remains. Dogs are just amazing aren’t they?

Dr. Gilson saw me sitting with him in the back. He looked at me and said “They just keep getting worse and worse.” He is right. The condition we are receiving these animals in is absolutely horrendous. Gilson stood over him. The look on his face said “where do I start?” He examined his body as best he could while he was awake. He told me the lacerations on his back end were bedsores and drag marks. He said that bed sore on his hip had to have developed to that size in close to a months time… meaning that his dog sat somewhere paralyzed and suffering for that long. In this condition he couldn’t be put under so our first goal was to stabilize him. He was put on fluids, a strong dose of antibiotics and steroids. We put a small bowl of food infront of him and he ate like he had never eaten before. Clearly it had been quite some time.

Rachel and I spent the next few hours pulling ticks off of him. Hundred and hundreds of them. While doing so, we decided he need a good strong name. We decided that he looked like a country boy. We named him Waylon. Later that evening I helped Rachel bring him to the car. I was already totally in love with him. He was such a good boy. When driving home that night so many questions came to mind that I know I will never have answers to. How does this happen? Why wouldn’t someone ask for help? How could people do this? How does ANOTHER immobile dog end up on the side of the road? Will he ever walk again? Will he survive? Why does this keep happening?! 😩

The next day Dr. Gilson performed a myelogram on his spinal cord. The news it brought was very upsetting. Waylon had a fractured spine. Where the spine was severed could have been surgically repaired so that he could have use of his back legs again but… it was too late. The spine had already healed. Waylon will never walk again. We were completely crushed for him as well as angry at who ever allowed this to happen. I will just say this. I completely understand not being able to afford a spinal surgery. They are expensive. Most families couldn’t. What I do not understand is how you could just let him sit like that in pain & the only solution that whomever had him could come up with was to put him on the side of the road? I will never understand… but that Is why we do what we do… because others won’t.

We are excited to say that we ordered him his very own camouflage wheelchair. Please see attached video. We have found ourselves a bit short handed in some other supplies needed to take care of sweet Waylon and the other Sky Sanctuary dogs. Cleaning supplies, puppy pads, e-collars, shampoo, martingales with leashes, comfy beds and such would all be wonderful to have for these deserving little ones.